A Tool for Carbon Dosage Control

The N2O Wastewater Sensor makes it possible for you to measure nitrous oxide (N2O) emissions directly from individual wastewater treatment plants (WWTPs). With hundreds of installations worldwide, the sensor is established as a very durable process sensor requiring minimal maintenance. The data collected from sensor installations have been key to shaping mitigation strategies.
Contact us
Name
Filetype

N2O as a control parameter for carbon dosage

You can use N2O as a control parameter for carbon dosage in the denitrification process, when you monitor the N2O concentration in the liquid.

N2O formation is linked to the ammonium (NH4+) loading, and N4+O formation increases as the NH4+ turnover increases. If high NH4+ oxidation rates lead to NO2- accumulation, N2O will build up in the liquid as a warning.

NO2- is the key substrate, besides NH4+, for anammox, but it is difficult to measure NO2- with present sensors. The measurement will be indirect as NO2- is formed and consumed inside biofilm or granules. Unlike NO2-, N2O is not consumed by the anammox bacteria. Therefore, online N2O monitoring will provide a more precise measure of the substrate balance. Thus, N2O is tightly linked to NO2- concentration through both nitrification and denitrification. This means that you can use the N2O sensor as a proxy for NO2-. 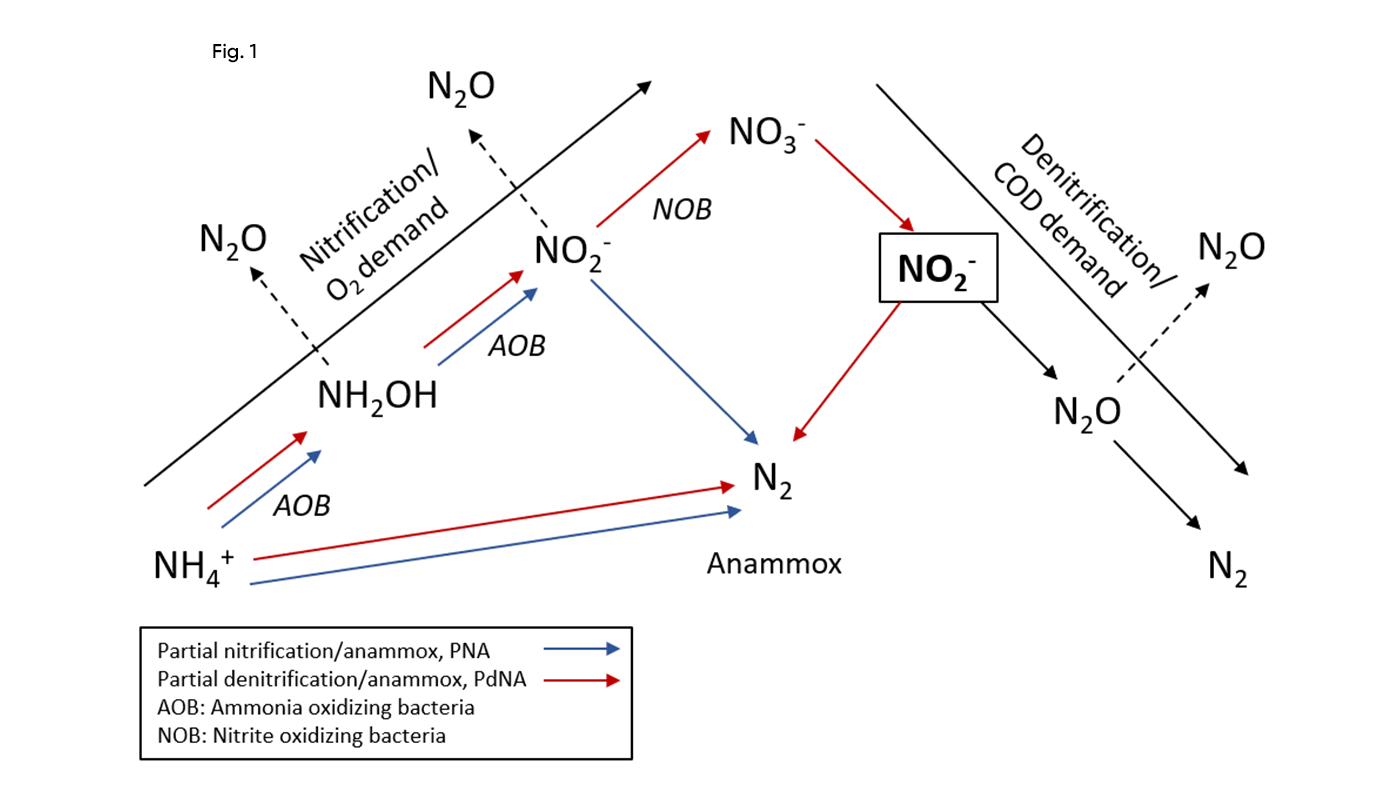 From a process control standpoint, the slope of the N2O curve in response to the different COD/N-ratios can be used as an indicator for the dominating sludge process. If you aim for complete denitrification to N2 to avoid N2O, you can apply the N2O sensor to monitor N2O concentration and increase the carbon load when the N2O concentration increases to ensure a COD/N ratio above 3.5. 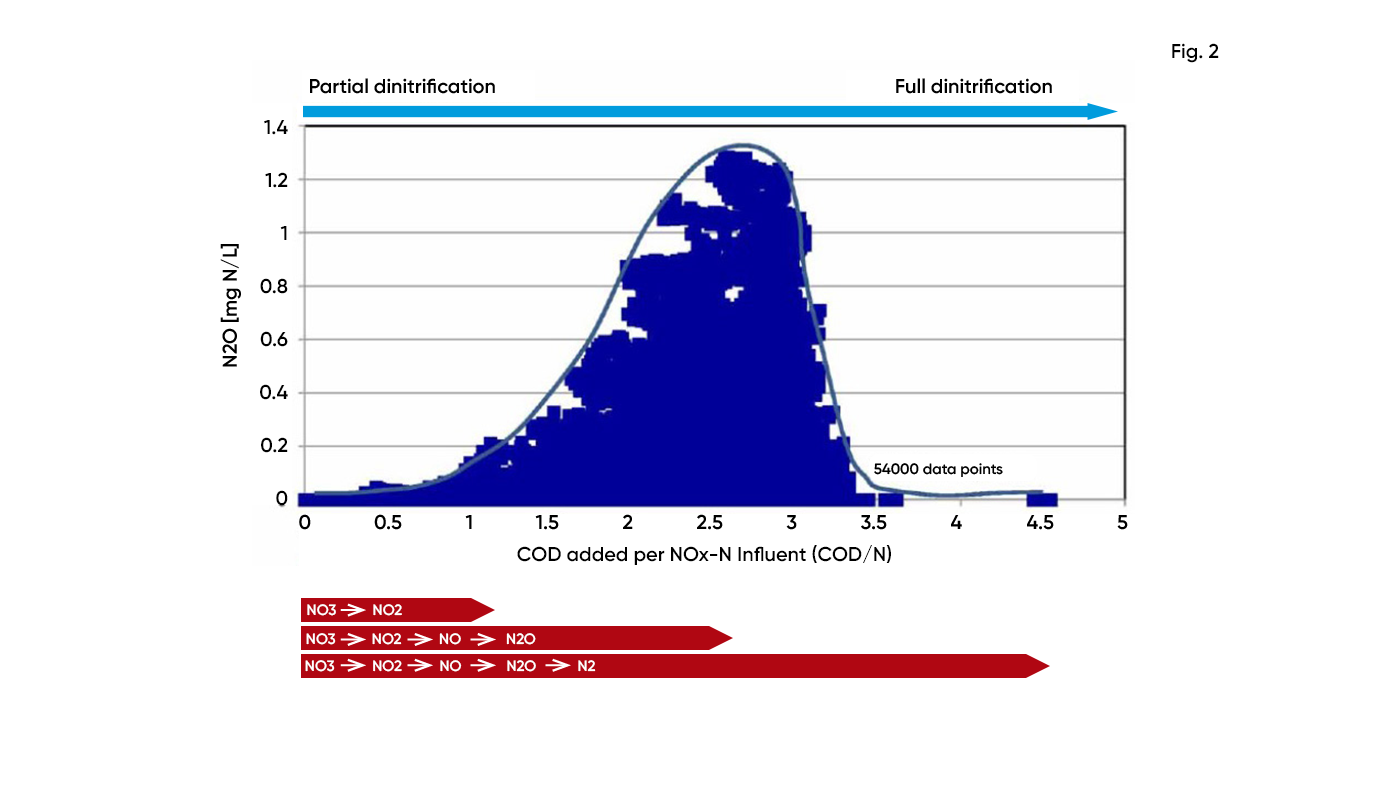 Anammox as an Alternative

Anammox is an alternative nitrogen removal process where N2 is formed from NH4+ and NO2- (Fig. 1). Controlling the substrate availability is important for the successful implementation of anammox. Two substrate control strategies that have been suggested are PNA (Partial Nitrification/Anammox) and PdNA (Partial deNitrification/Anammox). The PNA process aims at partial nitrification by inhibiting NOB (nitrite-oxidizing bacteria) to increase the NO2- available for anammox. However, the out-selection of NOB has proven operationally difficult. On the other hand, PdNA aims at partial denitrification to increase NO2- availability (Fig. 1).

While it might appear as a detour, anammox is operationally easier to achieve. The process has been demonstrated at temperatures down to 20°C, which makes it relevant in many parts of the world during summer. In the PdNA case, the relationship between COD/N and N2O can be used for controlling the partial denitrification process to accumulate nitrite for anammox and keep the COD/N ratio below 1. The N2O sensor can monitor the N2O formation and decrease the carbon loading to achieve partial denitrification to NO2-, which can be used for anammox. The carbon can then be harvested and used for biogas production. 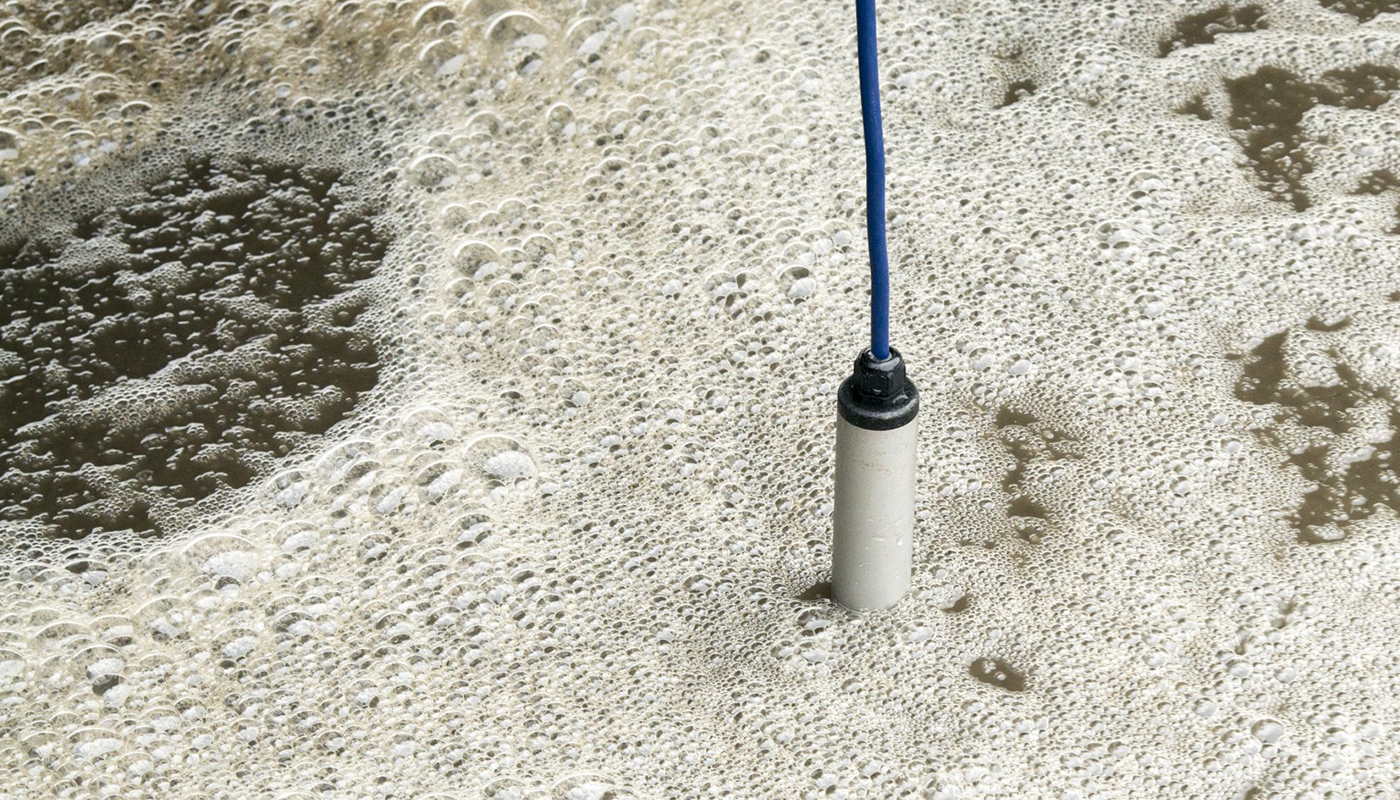 In conclusion, you can use the N2O Wastewater Sensor as a tool for carbon dosage whether the aim is complete denitrification to avoid N2O emission or PdNA where the sensor is used as a proxy for NO2-. Simultaneously, the new PdNA and PNA processes will make it possible for you to document their CO2 equivalent footprints in comparison to conventional activated sludge processes. 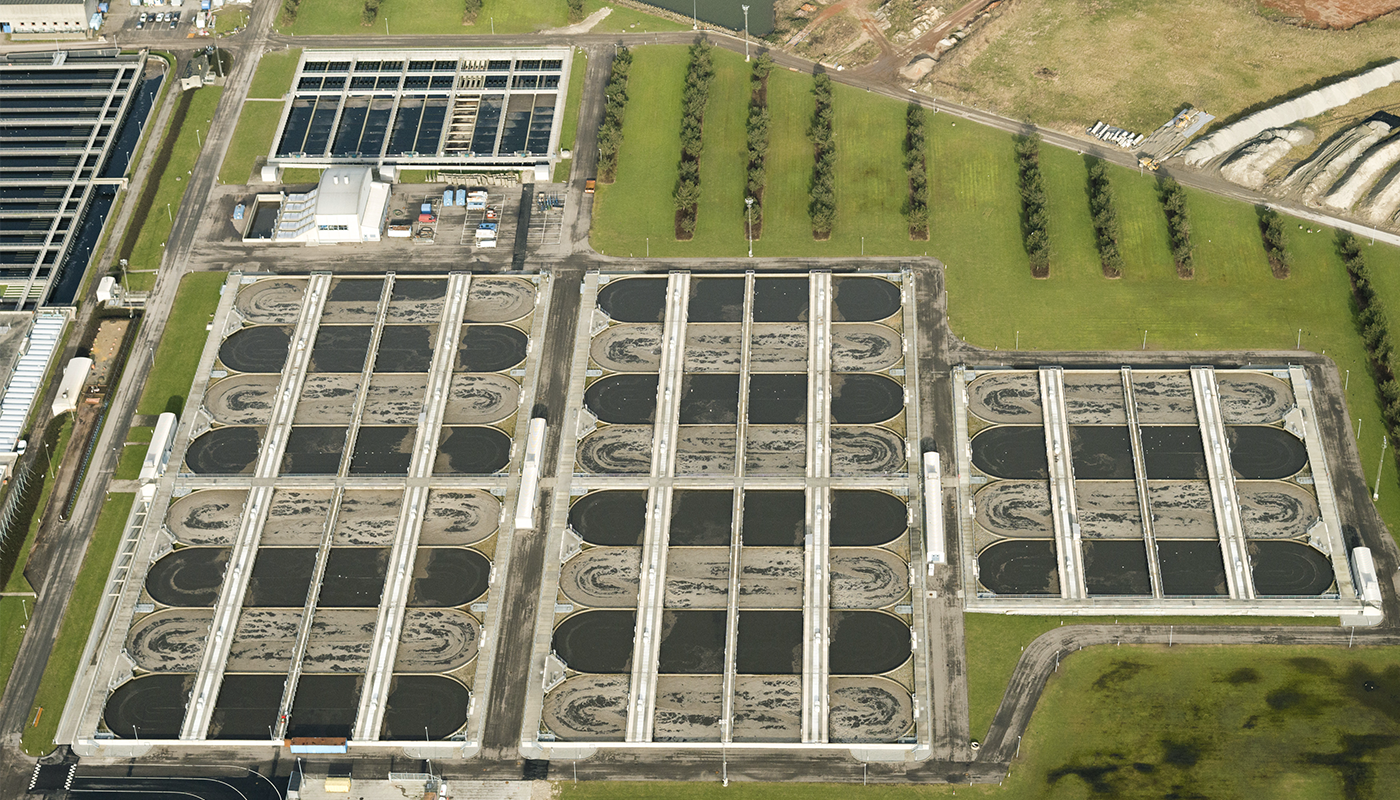