Full-scale data was systematically collected and analyzed to infer the underlying mechanisms responsible for N2O production and the variability of the N2O emission rate. The N2O emission and inferred CO2 footprint were highly variable and yet seasonally dependent, emphasizing the need for long-term continuous monitoring.

Based on the online data, potential control strategies were proposed and tested over 2 years in 25% of the full-scale volume to explore their feasibility of mitigating N2O emissions. In one year, a reduction of 74% in N2O emission was realized compared to the reference lanes. 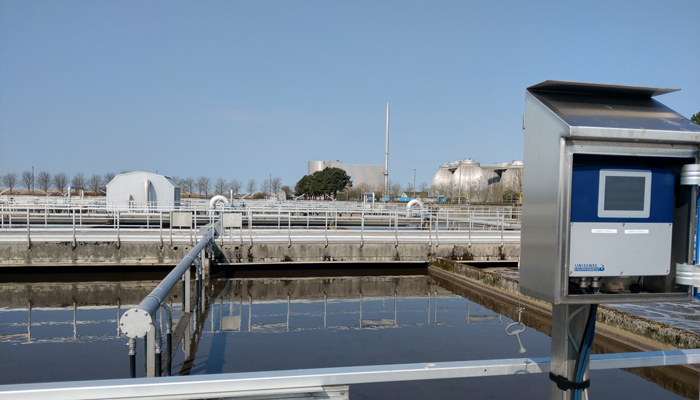 Water Resource Recovery Facilities (WRRFs) contribute significantly to the global greenhouse gas stock through the production and emissions of nitrous oxide (N2O), and the increase of the wastewater N2O emission factor (EFN2O) by IPCC2019 underlines this. In Denmark, based on a 2-year monitoring campaign on 10 different WRRFs in 2021, a new national EFN2O of 0.84% N2O-N/TN has been adopted by the Danish EPA. Learnings from the monitoring campaign confirm that N2O emissions vary significantly with the type of nitrogen removal process and emphasize the need for conducting exhaustive on-site monitoring of the N2O emissions.

To mitigate the inherent emission without compromising effluent quality, it becomes highly relevant to develop reliable and simple online monitoring and control strategies targeted at understanding and reducing N2O emissions from WRRFs. The present work presents 3½ years of continuous N2O measurements from a large high-load WRRFs and demonstrates the full-scale feasibility of a simple N2O control strategy based on analysis of relevant data to significantly reduce emissions. 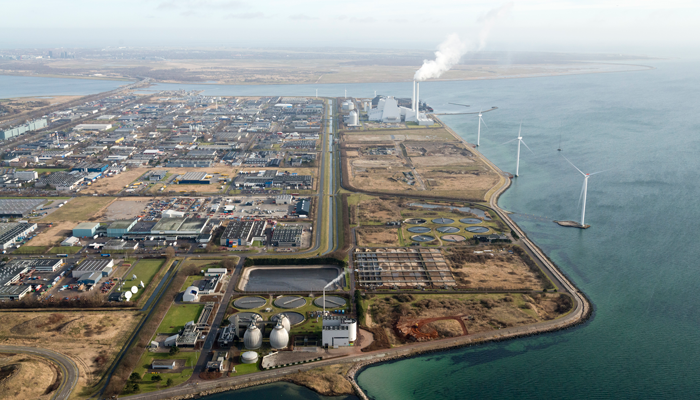 In the present study, four online dissolved N2O sensors (Unisense Environment) were installed and maintained in each compartment of two of the four parallel tanks (LT11, LT12, LT31, LT32) for more than 3½ years thus monitoring 50% of the bioprocess. N2O emissions for aerated and non-aerated zones were calculated online according to Baresel et al. 2016.

Following a 1.5-year monitoring period from 2018, compiled data was analyzed to understand the relationship between N2O emissions and operating conditions, (dissolved N2O, NO3-, NH4+, dissolved oxygen (DO), temperature, influent, etc.).

During the spring of 2020 and 2021 an adjusted MLSS and DO controller was tested in the controlled tanks LT31 and LT32 while keeping LT11 and LT12 as reference tanks. Equal loading and process balances for all tanks were observed while comparing individual Qin flow meters and cumulative Qair, NH4+, and NOX- usage and levels. 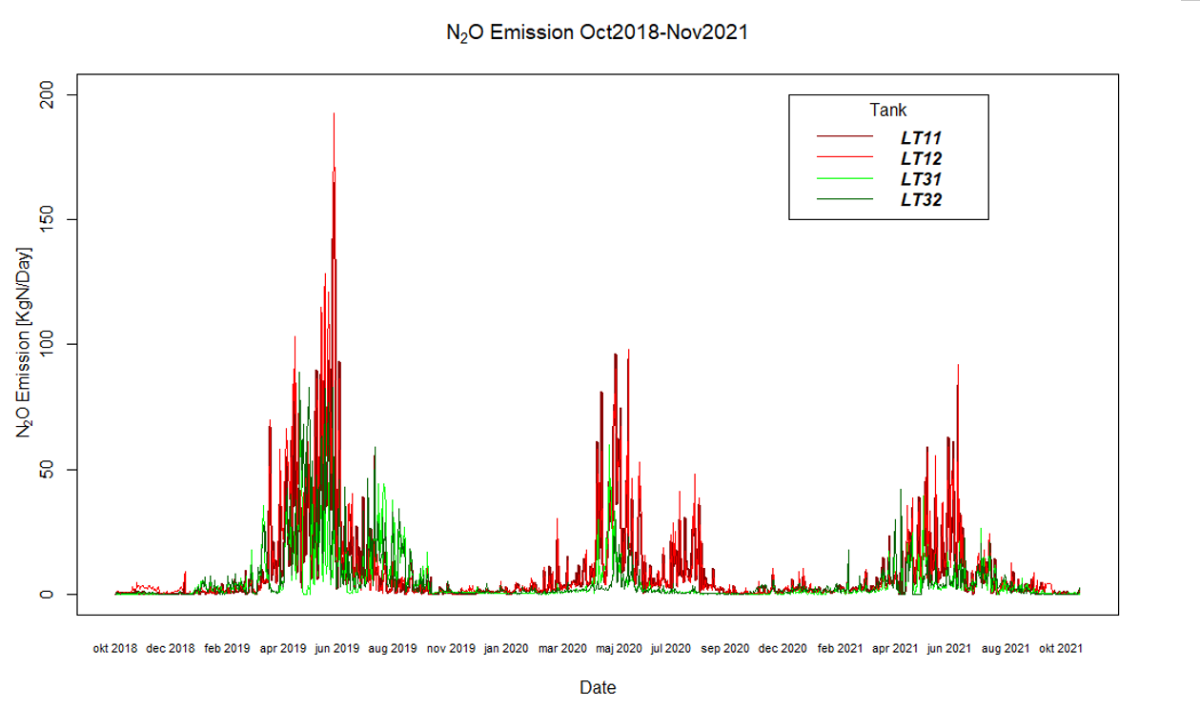 Following well over 3½ years of online monitoring of N2O in 4 of the 8 process compartments at Avedøre WRRF Figure 1 shows the latest 3½ years of N2O monitoring data collected in the SCADA system. The N2O emission data is shown as daily averages of KgN N2O/day and highlights the very dynamic seasonal and yearly pattern. The yearly pattern is repeating but the emission magnitude is very different between years.

The cumulative N2O emissions over 1,344 days are shown in Figure 2 for all 4 tanks. Interestingly, most of the emission is accumulated from March to August with variation between the compartments every year, but an overall similar trend. 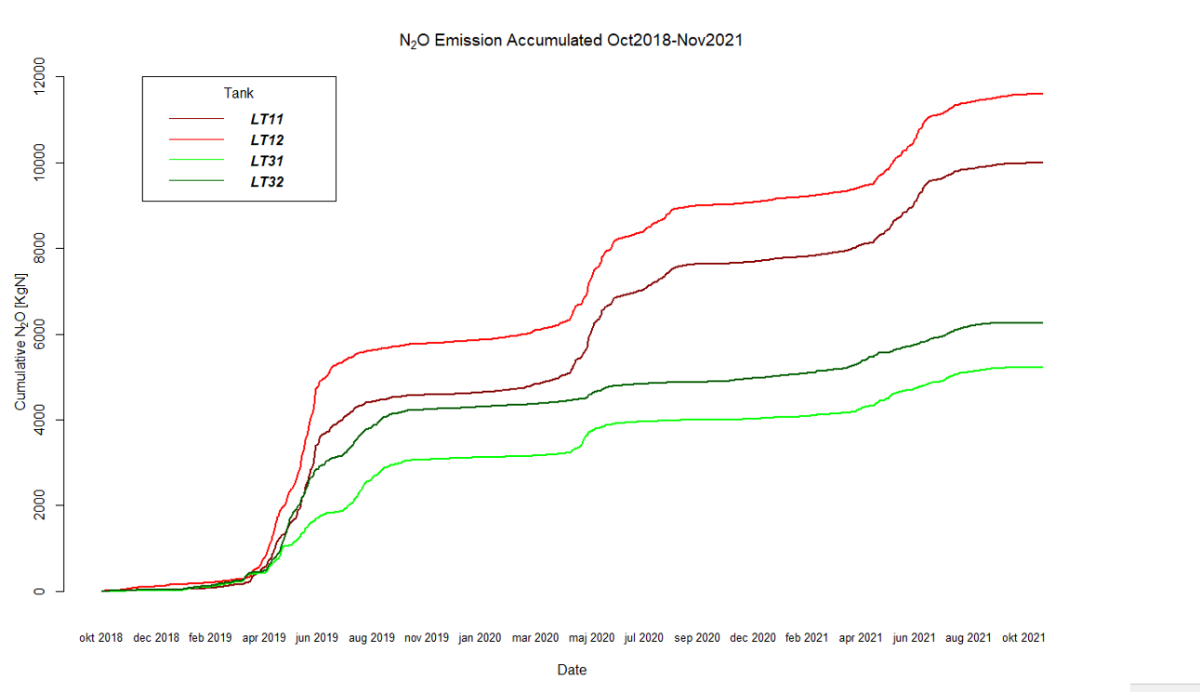 Using the IPCC CO2-equivalent factor (CO2-eqv) of 298 kg CO2 per kg N2O, a total CO2 footprint between 18,396 in 2019 and 9,885 Ton CO2-eqv in 2021 was demonstrated. Winter and summer emissions amount on average to 6.22 and 49.79 Ton CO2-eqv/day, respectively over the period. The EFN2O of Avedøre WRRF are 2 – 4 fold higher than the average national and IPCC2019 factors, indicating the importance of performing on-site monitoring of N2O rather than relying on average assumption.

Table 1: Comparison of N2O emission factors (% N2O/TNLoad or % N2O/TNTreated) between the reference tanks LT11 and LT12 and the MLSS controlled tanks LT31 and LT32. In 2019 no MLSS increases were made in any tanks and all 4 tanks were used for the average EFN2O. Included is the average daily TNLoad for all years.

As previously published (Andersen et al. 2021), during the period in 2019, where parts of the aeration system were undergoing maintenance, the lower wastewater load resulted in reduced N2O emissions by 65.5%. Following the results by Law et al. 2012 showing that increased N2O production can be attributed to increased specific NH3 oxidation rate by AOBs, we tested ways to decrease the specific AOB NH3 oxidation rate by simply increasing the MLSS concentration in LT31 and LT32, keeping LT11 and LT12 as reference tanks. As shown in Figure 3, over the spring months of 2020 and 2021 a significantly reduced N2O emission was observed coinciding with the increased MLSS concentration.

Summarized in Table 1, 3½ years of online N2O emission monitoring have demonstrated high and variable EFN2O above the IPCC2019 factor based on daily TNLoad or daily TNTreated. Furthermore, simple process changes have made a significant impact on the cumulative N2O emission, as shown for the MLSS controlled tanks exhibiting a lower EFN2O of 0.58% and 0.83% of the daily TNLoad for the years 2020 and 2021. Clearly, the large seasonal and yearly variations undermine results deducted from typical short-term monitoring campaigns and the present work exemplifies the difficulty in extrapolating even yearly emission results or use of a reference year for a general N2O emission factor. 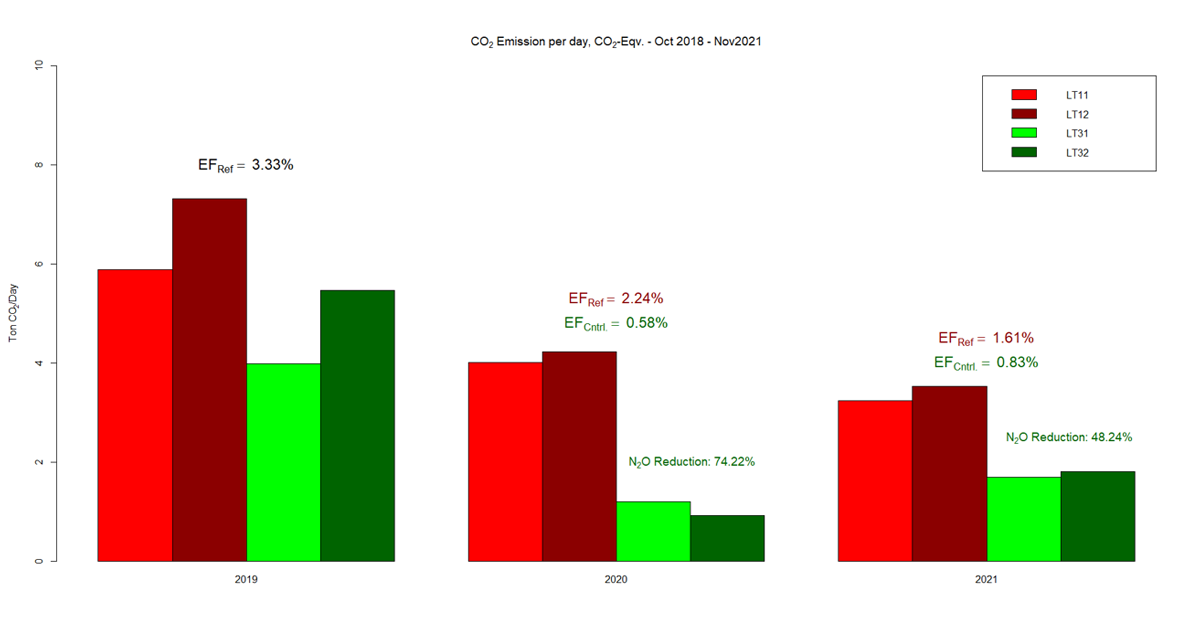 Figure 4: Comparison of the CO2-eqv emission per day (Ton CO2-eqv/Day) between the reference tanks LT11 and LT12 (red) and the higher MLSS tanks LT31 and LT32 (green). In 2019 no MLSS increases were made, but a 25-day repair in LT31 resulted in lower emissions. The N2O emission factors are shown as EFN2O in % N2O/TNLoad. The emission reduction between the reference and controlled tanks are also shown in %.